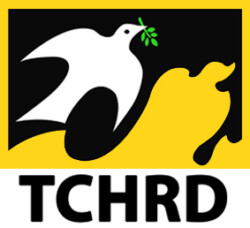 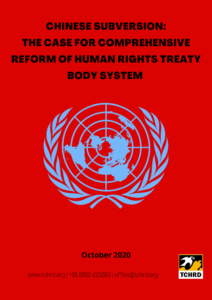 Today is the 75th anniversary of the United Nations when the UN charter went into effect in 1948. As we commemorate the UN Day to reaffirm and recognize our common challenges and belief in multilateralism, it is incumbent upon all stakeholders to devise sustainable solutions and take concrete actions to achieve justice, equality and dignity for all.

The year 2020 hosts the UN Treaty Body Review, called for six years ago in the General Assembly Resolution 68/268. As the review is underway, stakeholders will do well to recognize that the People’s Republic of China (PRC) and other like-minded states are looking to strengthen only the elements of the treaty bodies that are top-down and state-oriented. Review of the Treaty Bodies should be wary of ambitions to channel power away from rights-holders.

A report released today by the Tibetan Centre for Human Rights and Democracy (TCHRD) called for more comprehensive and fundamental reform efforts to strengthen the capacity of all to enjoy their human rights during the 2020 review of the Human Rights Treaty Body (HRTB) system and to refrain from a  state-centric approach to strengthening the HRTB, which will contribute little to making the system effective and accessible to key stakeholders, such as civil society organizations and victims of human rights abuses.

The report titled ‘Chinese Subversion: The Case for Comprehensive Reform of Human Rights Treaty Body System’ notes that while the independence and impartiality of the treaty body members and a clear, streamlined and feasible reporting system are important to avoid conflicts of interest and maintaining transparent human rights monitoring, it is also critical to foster a free and secure space for all stakeholders to engage with the treaty body system.

The PRC is party to six out of 10 human rights treaty bodies, but it frequently disrespects the obligations it agreed to uphold. On top of defying HRTB working practices by failing to turn in their mandatory reports on time, PRC delegates behave in often noncompliant, inappropriate, and sometimes even threatening ways during their treaty body reviews. Worst of all, the PRC continues to ignore Treaty Body Committees’ recommendations on addressing its treaty violations. As a result, crimes against humanity continue to be committed with impunity in Xinjiang and Tibet.

The PRC exemplifies the growing number of states working to manipulate the HRTB to conform to their state-centric interpretation of human rights implementation. Having considered the various ways that states like PRC manipulate, obstruct and exploit the current HRTB system, the review needs to focus more on implementation and assessment and less on the formulation of resolutions and recommendations. Stakeholders must adopt reforms that affect not just the HRTB system’s working methods, but its capacity to achieve its original purpose: help all people to enjoy their human rights.

The report presents PRC as a case study on how the HRTB in their current form enables states to neglect their human rights obligations. The PRC’s repeated violations of its treaty obligations demonstrate how the current mechanisms of the HRTB allow the world’s most authoritarian States to repeatedly ignore their obligations, leading the way for like-minded States to commit similar violations.

Developed as a means to promote the universal implementation of the international human rights treaties and to hold States to their treaty obligations, the HRTB  has faced increasingly hostile behaviour from ratifying States. The UN is a custodian of universal values, as expressed by legally binding human rights norms,  which means a threatened HRTB system endangers the enjoyment of universal human rights by individual rights-bearers.

The report can be downloaded here.